We are the Society for the Promotion of Education and Advancement of Knowledge.

You are not connected. Please login or register
2 posters

In today’s issue of Metro, the story on p. 4 entitled “Germans tell May: Europe has no more cards to play” by Dominic Yeatman ends with these paragraphs:


Greek MEP Stelios Kouloglou declared Brexit had become a ‘case study of how nationalist demagogy can destroy a country’.

He added: ‘It will be taught in universities.’

That is the precise two-word phrase quoted in the story. Brexit is a “nationalist demagogy”.
George

The Conservatives have lost 1 334 councillors, with Theresa May saying voters wanted the main parties to “get on” with Brexit.

Labour also lost 82 seats in the English local elections, in which it had been expected to make gains. But the strongly pro-EU Lib Dems gained 703 seats, with leader Sir Vince Cable calling every vote received “a vote for stopping Brexit”. The Greens and independents also made gains, as UKIP lost seats.

At this rate, who knows? The Liberal Democrats may even win the next general election (which may not be very far away)! If that happens, my friend Russell is surely going to die of joy.

At this rate, I can only foresee two things: either a no-deal Brexit, or no Brexit at all. Events have shown that there is absolutely no way any deal whatsoever can be reached in Parliament.
George

I blame the Prime Minister for all this Brexit fiasco. When is she going to step down? May May go in May!

To be fair to her, any other prime minister in her place is hardly going to have an easier time dealing with the thorny Brexit issue. Despite the result of the 2016 referendum, the country is still firmly divided over whether to Leave or Remain. But, to be sure, Theresa May has achieved scarcely anything notable since taking office. Her first big mistake was to call a snap general election, thinking her party was going to romp through it – only to find herself hanging on to power, with the result that the DUP, to which she had to grovel for a power-sharing coalition, is subsequently complicating the Brexit process with its demands over arrangements for the Northern Ireland backstop. It was a supreme act of arrogance, if you ask me.
George

It would seem that David Hughes, writing in today’s Metro, agrees with you. In the article entitled “Brexit deal is dead if MPs say no again, May warned”, he notes:

That would leave just two options when the October 31 deadline looms, a no-deal Brexit, which has previously been rejected by MPs, or the revocation of Article 50, cancelling the entire process.

It was something that should come as no surprise to anyone astute enough to foresee it. Still, despite much criticism of the move, I thought it was a nice gesture for the government to try and put cross-party differences aside and sit down with the Opposition.
George 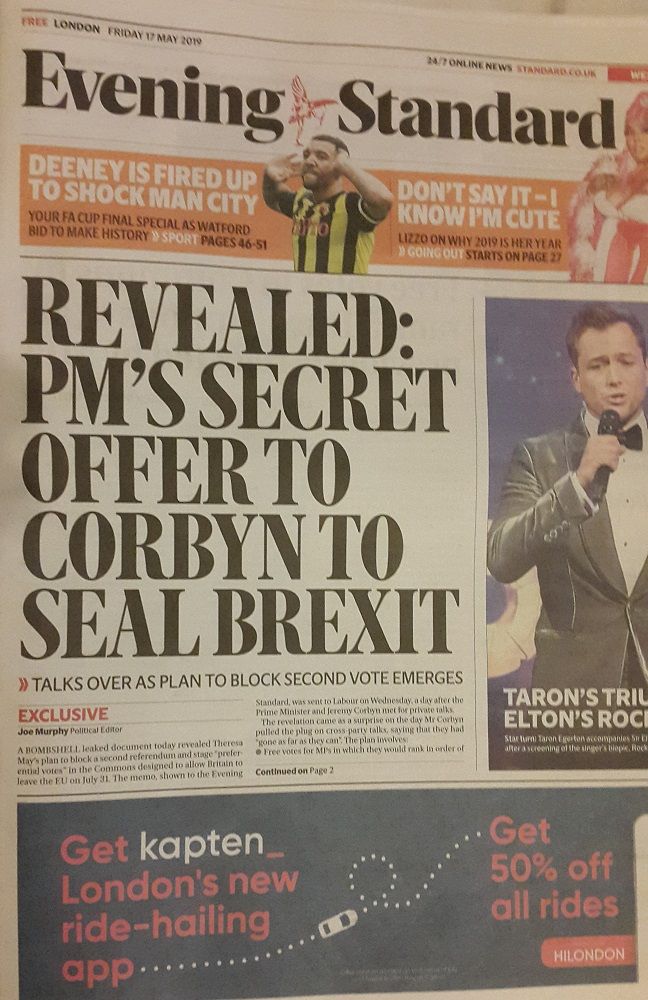